“I can’t believe you directed that.”

I’m a girl.  Okay, I’m a woman.  Forty-eight years old, to be exact.  I’m not a film school graduate.  In fact, I never studied directing, I just stumbled into it.  But that’s another blog.

As a woman, I am apparently expected to write, produce and direct a very specific kind of genre – romantic comedies, Neil Simon comedies, classic epic dramas involving women of a different century bemoaning their lack of options, light, fluffy things with a woman traveling around the world in pretty countries doing thoughtful things.  What I’m not supposed to be drawn to is hard core male-dominated scripts, coarse language, violence, and dark, disturbing themes.

I first heard this comment when I directed one of my favorite short films, The Change-Up.  I wrote it with my two writing partners, Monica Hafer and David W. Smith, as part of a 48 Hour Film Project.  I wanted something Tarantino-esque and that’s what we wrote – a clever, funny script about two women assassins who go after the wrong bad guy and must escape his henchmen.  We put what is traditionally male dialog into the mouths of these kind of hardcore chicks.  No victims.  No whining.  In the end, the women kill the henchmen and make off with their shoes and their beer.  After the first screening of it, someone actually said to me, “I can’t believe a woman directed that.”  Huh?  Why?  “Well, it doesn’t feel like a woman directed it.”  Because it’s quick-paced?  Action-packed?  Has the word “fuck” in it?

Most of what I write features women in roles traditionally given to men.  I love turning those gender expectations around and make people think.  But that’s apparently not what a female director/writer is supposed to do.

Even when I direct female-centric pieces, they are not what most people expect a woman to direct.  I directed a play, “Keely and Du,” about a woman kidnapped by pro-lifers and chained to a bed, being forced to have her baby, which she was about to abort.  I thought it was the perfect thing for a woman to direct.  It’s basically two women drawn together by diametrically opposed beliefs, yet they grow strangely close, bonded by their own humanity.  Still, I got, “I can’t believe a woman directed that,” mainly because it’s intense, it’s tragic and it’s very hard to watch.

“We put what is traditionally male dialog into the mouths of these kind of hardcore chicks.  No victims.  No whining.”

My latest film, Mastermind, is a comic book-oriented, graphic novel-style film.  It world-premiered at the Comic-Con International Film Festival in July, 2010, in the midst of the height of geekdom in San Diego.  It’s a beautiful script written by Michael Patrick Sullivan, about an amnesiac who just might be a supervillain.  Liz, the female lead in the piece, is a well-written, smart, funny woman who is just a bit twisted and might be just as bad as the villain is.  I loved the script from the first paragraph.  The film itself has been very well-received.

But again that refrain – “I can’t believe a woman directed this.”  Because women aren’t into comic books.  Women can’t be dark.  Women can’t break out of the box and break through gender barriers.

Why is it acceptable for men to direct female-oriented romantic comedies but it’s not okay for women to direct Dark Knight fare?

When I bring this up, the inevitable response is Kathryn Bigelow.  She’s become the benchmark for women directors everywhere.

My response?  Screw you.

Don’t get me wrong.  I have great respect for Kathryn Bigelow, both before and after Hurt Locker.  She is one of the few women who has directed action successfully.  She is the first woman ever to win the Oscar as a director.

“I want to see a woman have a $100 million action franchise.”

But my goal is to be Christopher Nolan meets Quentin Tarantino.  I want to create gritty, twisted, dark characters and put those on the screen.  Because most of the women I know want to see that kind of fare, along with Twilight and Eat, Pray, Love. We want diversity.  We want to see ourselves and our deeply wounded souls up on the screen.

And yet, I still get the same response to what I write and direct – “I can’t believe a woman wrote/directed that.” 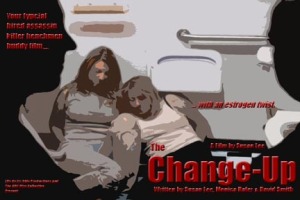 The Change-Up, a short film by Susan Lee. (Photo courtesy of S. Lee.)

I’m not sure there is a way to change that mind-set.  Hollywood studios are very locked into fitting artists into little tiny boxes and leaving them there.  You’re a woman, you direct rom-coms.  You’re a guy, you can direct whatever you want.

I want to see a woman have a $100 million action franchise.  And I mean real action, not Twilight. I mean Kill Bill blood and guts and violence and hard-core fight sequences, without relegating the lead female to lycra and leather.

We can write that.  We can direct that.

But until people can put their perception away of what a woman            can/should/ought to direct, that benchmark will never be reached.