BETTY M PARK is a Korean American filmmaker based in Brooklyn, New York, and makes her debut as a feature film director with Mamachas del Ring. She works as a producer and editor in TV, and her work as an editor includes the documentary The Innocence Project, which screened at the 2003 Hamptons International Film Festival.

Betty was born and raised in New York, and graduated from the University of California, Berkeley, with a double major in English and Philosophy. In addition to making films and TV, she continues to encourage others to resist the urge to punctuate her name.

Her Film:  You work as a television producer and editor, with Mamachas del Ring being your directorial debut.  How did you draw from your producing and editing experience to inform this film?

Betty M Park: Being in the daily grind of telling stories for TV is definitely a kind of bootcamp for storytelling, and while I can’t point to specific links between that work and Mamachas del Ring, I’m sure it has helped develop my craft. 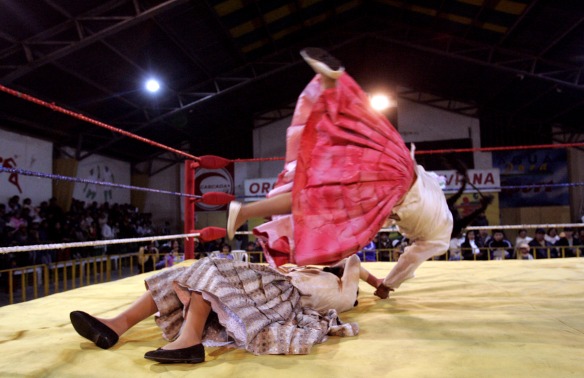 HF:  Inevitably, filmmakers learn something about themselves in the process of making a film.  What have you taken away from your experience making this film and what did you learn from the women whose lives you documented?

BMP: One of the things that struck me the most is how similar Carmen Rosa’s experience as a struggling wrestler is to that of an independent filmmaker, or anyone who has an all-consuming passion for that matter. There are distinct choices we make in terms of prioritizing our personal lives versus our work, and these are the choices that in part define us and make us who we are.

“The film landscape is constantly evolving, and there will always be an infinite number of ways to approach it.”

HF:  There is a strong theme of self-empowerment in Mamachas del Ring while also showing the cholitas’ reality of “gendered responsibilities” as you say on your website.  What do you think the legacy of the cholitas will be?

BMP: My hope is that the cholita wrestling revolution has forever challenged and changed the stereotype of Bolivian indigenous women for both Bolivians and those abroad. I also think that, due to media-interest even outside of this specific documentary, cholita wrestling has provided an entertaining and interesting entry-point into a country and culture relatively unknown to your average person. 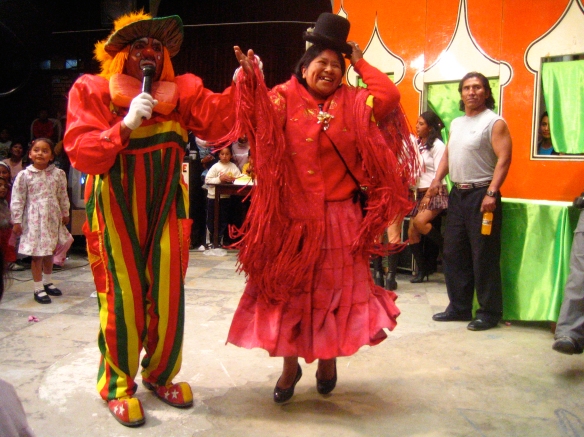 Photo courtesy of the filmmaker

HF:  Mamachas has screened around the world in front of culturally diverse audiences from Buenos Aires to Montreal, Austria to Uruguay and many places in between.  Do you notice differences in how audiences interpret the story or their attitudes toward the film’s themes?

BMP: While I think each audience comes with a different background of information, I’m not sure I could speak to region-specific reactions.

Generally speaking, I think what initially attracts people to Mamachas is the opportunity to peer into what appears to be a strange and exotic universe of women wrestling in indigenous clothing, but what they take away is a more personal connection with Carmen Rosa and her struggles.

HF:  Did you have a film festival strategy and if so, how did you decide on where you wanted it to premiere and screen?

BMP: The general rule of thumb for me (and for most people, I think) was to try to premiere at a festival that was well-known enough to provide the opportunity to generate some press and “buzz,” in addition to having a strong market where there would be buyers and industry folks in attendance. The regional premieres that followed were also guided by a similar principle.

I had always thought that Mamachas would have an audience outside of the US, and so for me international festivals were as important as the domestic ones. It was also extremely important to me to have a strong Latin American premiere, since this is a film about Latin America.

HF:  How have you utilized social media and new/online media for Mamachas?

BMP: Facebook and twitter have been invaluable in connecting with both fans of Mamachas, potential fans of Mamachas, and the film community. I reached out to a lot of pro-wrestling fans online, and diva-dirt.com was especially supportive. The site focuses specifically on female wrestling fans, and they were extremely generous in helping to promote the Indiepix DVD and VOD release of Mamachas earlier this summer. Photo courtesy of the filmmaker

HF:  Can you describe your marketing and distribution plan for this film?

BMP: The marketing and distribution for this film relied heavily on connecting with folks in the film community through festivals and general word of mouth. There were a few identifiable audiences that I tried to reach out to, including fans of wrestling, fans of Latin American film/Latin American audiences, and the more general arthouse film crowd. Of course distribution comes down to having the right platform through which people can access the film, and right now it is available in its most democratic form–DVD and VOD.

“There are distinct choices we make …that in part define us and make us who we are.”

HF:  Are there any lessons or skills — technical, financial, creative — that you picked up along your journey making this film that you will apply to future projects?

BMP: One of the most valuable experiences I’ve had in this process is connecting with other filmmakers, many of whom have grappled with similar hurdles in the ups and downs of indie filmmaking, some of whom who have become dear friends. The film landscape is constantly evolving, and there will always be an infinite number of ways to approach it. To have a few trustworthy sounding boards within the community is priceless to me, and will be especially helpful moving forward with future projects.

HF:  What’s next on your slate of projects?

BMP: I’m currently working on an animation, and exploring a few documentary ideas.

To connect with Betty M Park and learn more about her work, check out the following: