Therese Shechter deftly uses humor-spiked, personal narrative to chronicle feminism and sexuality, and is proud to have been labeled a “Brazen Advocate of Slut Culture” by conservative bloggers. Her first documentary I Was A Teenage Feminist has screened from Stockholm to Delhi to Rio and at Serbia’s first-ever Women’s Film Festival. Therese has created videos and written about virginity and feminism on the film’s blog and in the Chicago Tribune, the Bitch Magazine blog, Adios Barbie and Women & Hollywood. She was recently a featured panelist at Harvard University’s “Rethinking Virginity” Conference and at MomentumCon: Feminism, Sexuality and Relationships in Washington. Therese’s short documentary How I Learned to Speak Turkish has screened internationally and her production company Trixie Films is based in Brooklyn and sometimes at a little cafe in Istanbul.

“I won’t tell you how to have sex for the first time, but I do want to know why we’re so obsessed with female virginity.”

The US government has spent 1.5 billion dollars promoting it. It has fetched tens of thousands of dollars at auction. And 50 years after the sexual revolution, it continues to define a young woman’s morality and self-worth. Using her own path out of ‘virginity’ to guide the narrative, filmmaker Therese Shechter creates a far-reaching and very personal dialogue with women along the sexuality spectrum, revealing the myths and misconceptions behind this so-called precious gift.

Her Film:  You’ve been working on your documentary How to Lose Your Virginity for the past several years.  Can you update us on the film?

Therese Shechter: We’re almost done editing the film, which is very exciting. This is the most challenging part because this film’s subject is complicated, and there are a lot of moving pieces. I really like tackling big concepts like feminism and virginity by getting at them through very personal stories, both my subjects’ and mine. Then we’ll be working with our composer and animator to add the finishing touches. By the time we’re clearing footage and correcting color and mixing sound, I’ll be in heaven because the heavy lifting will be behind us. Frankly, I’m exhausted.

Needless to say, this all costs a lot of money, so this Kickstarter is really crucial. I’m so psyched to finish it and get it out in the world. We just did a great little sneak preview at the Momentum conference for many of the top folks in feminism and sexuality. I get contacted by distributors, film festivals and college professors all the time asking “Is it done? Is it done?” and I really can’t wait to say “Yes! Here it is!” 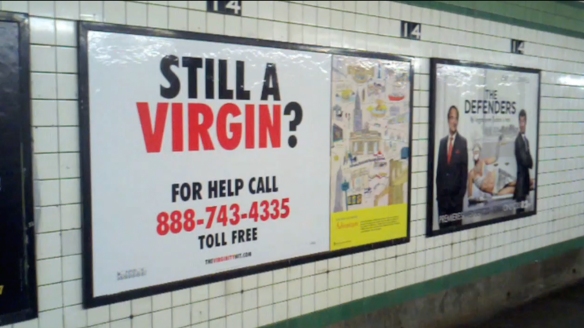 HF:  How are you building your audience?

TS:  We’ve been building our audience almost from the very beginning through our blog. Some people do blogs to track their filmmaking process, but I was a lot more interested in the topic of virginity itself. I initially wrote posts that called out a lot of the sexism and bad science around abstinence-until-marriage programs, and the disturbing outbreak of virginity auctions all over the world.  Then I branched out into pop culture as well as creating a space for our audience to talk about their own personal experiences with virginity culture.

Plus there’s the constant back and forth of Facebook and Twitter posts, sharing little bits of video online, supporting other writers and filmmakers doing sexuality-related work, and writing for other publications on the topic. I recently did something about virginity loss myths for a great site called Adios Barbie, and did a breakdown of the virginity loss stereotypes in an episode of “Glee” for Women & Hollywood. I think you have to create a good balance between interesting information and dialogue with your audience if you want to build that anticipation and goodwill. We can see it with the response to our fundraising campaign, with so many people supporting a project they already feel invested in personally.

HF:  I’ve taken a few looks at the blog you have to support the storytelling and sharing around the topic of virginity, and you include many first-person pieces.  It’s amazing and inspiring to see how many people are willing to share information about something so personal as their virginity and sexuality.  What inspired you to introduce this type of “confessional-style” blog post?

TS: I love First Person, and since we launched it in 2009, it’s become the most popular thing on the blog. I was inspired by fellow virginity geek Kate Monro who writes a blog called The Virginity Project in the UK. Aside from her work, most everything else I found was very mainstream and almost nothing outside of religious sites addressed people who weren’t sexually active. I could tell from our blog comments I had a lot of folks out there whose experiences–and even definitions of virginity–didn’t conform to the black-and-white stereotypes of pop culture. So I started building this collection of what I like to call “sexual debuts and deferrals.”

We’ve run stories from a woman who lost her straight, gay and three-way virginity in one night (hey, it worked for her); a Mormon college student who first wrote about being a virgin and then did an update after she had forbidden pre-marital sex (verdict: meh); and we get quite a few submissions from guys in their 30s and 40s who talk about what it’s like to be an older male virgin (not good). We’ve also run several First Persons by women who had intercourse for the first time because of sexual assault, and they want to share their experiences and recovery with others. My favorites are the “update” First Persons that I get when a previous poster starts having sex. One woman said the first three people she told were her roommate, her best friend and me for the blog. I kind of love that.

There’s a lot of silence around how and why and if we become sexual and I think these stories really help us all feel less weird and alone. I really could have used this when I felt like the very last virgin in art school.

HF: Are there differences in what you’ve learned through the actual filming of the documentary and the interactions you have with people online through your blog or twitter, for example?

TS:  When I started working on the film, I was really focusing on young women being shamed for being sexual and the value that’s place on virginity. It was in the zeitgeist and was getting all the attention. But when I started getting the First Persons, I was surprised at how many were coming from people in their 20’s who were ashamed of not being sexually active and that became a much bigger part of my film and the blog.

HF:  Can you talk about your current crowdfunding campaign and the phases of your financing for the film (where the money goes)?  In a message to me earlier this year on twitter, you said you’d “love to mention how much ‘low budget’ docs cost, because some backers don’t know why $13K didn’t cover all our costs.”  Any challenges in dealing with financial backers that you’d like to talk about?

WATCH THE TRAILER FOR How To Lose Your Virginity

TS: Since 2008, almost every independent documentary filmmaker has been struggling to find financing for their projects. Not that it was so easy before, but now foundations have even smaller endowments than ever and many TV networks are either only looking at finished films or have abandoned documentaries altogether in favor of reality shows.

We’re currently doing a Kickstarter to raise $35,000 to pay for the rest of our edit, our composer and our animator. If we don’t meet our goal I’m really not sure how we’re going to finish the film. We got through production thanks to an amazing group of DPs and producers who worked for free or lowered fees, lots of interns doing the research and one very small fundraiser. Then we had our first Kickstarter and raised $13,000 which paid for about five weeks of editing. For the rest of it I’ve had to beg, borrow and reach very deep into my own pockets to keep things going.

The average documentary you see on TV will cost half a million to a million dollars to complete, and that often means hundreds of thousands of dollars of free labor by the filmmakers. A lot of our non-filmmaker backers have no idea, and really why should they? We have to keep educating them on what things cost and the fact that you really do have to pay your full-time editor a salary for at least several months. And also about how it takes so incredibly long to finish something because you have to keep stopping to raise (or earn) more money.

I think that once people understand what goes into a documentary, they’re amazingly supportive. I’m been blown away by the support we’re getting for this campaign and the abundant generosity of complete strangers. We can’t relax until May 9th, though. If we don’t meet our $35,000 goal by then, we don’t get anything, so it’s going to be a little intense until then.

Read a recent article at the Huffington Post on female sexuality which discusses Shechter’s new film:  “Virgins, Bondage and a Shameful Media Fail” by Soraya Chemaly.

To connect with this filmmaker, support her film and to learn more about her work, check out these links:

How to Lose Your Virginity Blog: www.virginitymovie.com