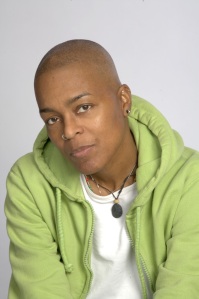 Campbell is an award-winning filmmaker/curator whose films include the award-winning BD Women about Black lesbian lives and history, Legacy about the lasting impact of slavery on Black families and Fem, a butch homage to queer femininity.   Her body of work was honoured by the Queer Black Cinema Festival in New York (2009), and she curated “No Heroes” in 2010 at Iniva.  She was a selector for GFEST 2009-11 and the festival director for The Fire This Time! – Queering Black History Month.  Campbell has been published in Diva Magazine, Feminist Review, The Pink Paper, and many more publications.

Her Film:  What is your film Stud Life about and what drew you to making this film specifically?

CampbellX:  Stud Life is a film where a stud lesbian and her gay man best friend deal with what happens when she gets tight with a femme lesbian lover. “who did you wake up with? your lover, or your best friend?” The story is about how you negotiate time with your queer family when you want to be with a new lover.

I made the film as there are actually a dearth of images of masculine females – studs/butches/bois in cinema and not that many images of QPOC [Queer People of Color] anyway. The queer films tend to be from a Eurocentric perspective and whenever there are QPOC in films often our presence, whether it is the filmmaker’s intention or not, is often treated like we are giving insight into our “problems” and the issues of “gayness with our cultures”. We as QPOC filmmakers are not given the space to just tell a story where we are central to the narrative and it not be problematised.

I also made the film to show that London is very mixed and jumbled up if you live in an urban environment. So immigrants, queers, and the indigenous people are all living on top of each other and have to learn to negotiate the spaces we occupy. However we are now heavily influenced whether queer or not,  and from whatever class or ethnicity, by African Caribbean and African American culture in our clothes, language and the way we dance.

Very often British cultural product that shows this urban life is usually straight and homophobic and the ones that are LGBT are very “white”. Stud Life shows a different reality.

HF:  What has the reaction been to the film?  How do you engage with your fanbase/followers around the topic of the film to continue to build an audience?

CX: The reaction to the film has been mixed. Stud Life is not for everyone. It has scenes of sexual practice and violence some people may find triggering. The main role is that of a stud, which many lesbians who wish to have a mainstreamed image of ourselves find shameful.  It is also not a segregated film. It shows a world where genders, sexual orientations and ethnicities mix. Some queer audiences like their films gendered – boys only, girls only.

With this in mind I have been absolutely bowled over by finding the Other Audience who do not really care for this and are hungry for something different.  They have responded with love and joy at the screenings. So far all screenings have been fully booked out with many sold out screenings. The audiences have laughed, cried, screamed, groaned and shouted at the screen. I have had many tweets, Facebook feedback and posts written from audience members. Some quoting lines from the film or saying how the film related to them personally. I have found these touching, as when I wrote the film, I had no idea if anyone would even like the film or come to see it.

I used Facebook from the very beginning to connect with an audience and later Twitter and YouTube. I think it is important in these media to share others people’s work as well. Stud Life is about building LGBT community around queer cultural product. We seek out those who are doing the same. We actively promote those whose voices continue to be silenced by mainstream straight and LGBT media.

HF:  You’ve directed a number of projects, but can you speak a bit about your experience making your first feature film?

CX:  My experience of making my first feature was like that of a virgin. I had no idea what it would be like so I went into it all wide-eyed and innocent. This is even though I have made several award-winning short films before. I had one goal and it was to finish the feature. I could not have done it without community support and by that I mean the wider filmmaking community in London, the people who live and work in East London and also the wider international LGBT world who stumped up cash for our IndieGoGo campaign. The cast T’Nia Miller, Kyle Treslove, Robyn Kerr and Simon Savory were put through a gruelling 10 day shoot in the cold and wet London weather but were always chipper and professional and put in stellar performances.

I am one of the privileged few in the UK to have made a feature film – Stud Life was the only new LGBT film made in 2012. That is a sobering thought considering we made the film “by any means necessary” and received no film grants from any of the funders who give money for film. This allowed me to have a freedom to play and to cast the leads I wanted and also choose the crew I wanted to work with.

I am no longer a virgin and now have baggage that anyone does after the “first time”.

To connect with this filmmaker and to support her work, please visit these links: