Read MJ Slide’s biography and her first Her Film interview (“Staying True to Yourself”) from September 2010 here.

Her Film: It’s been about a year since your first interview with Her Film when you discussed your film, The Saving, and you took it to the Seattle True Independent Film Festival this June.  Can you talk a bit about your expectations you had for the film and what’s been happening with it?

MJ Slide: The release and reception The Saving has received has far exceeded my expectations. It’s been screened in dozens of the theaters across the US and in the UK. As awesome as getting into festivals is (5 to date for this film) more importantly for myself as a Writer/Director would be the fact that individuals have really connected to the film’s message and passed on the word that this upstart 18-year old filmmaker is serious about making films and making them with quality generally not associated with my age.

Filmmaker MJ Slide at the premiere of her first film, The Saving, in South Carolina. (Photo courtesy of the filmmaker)

HF:  What are the most important lessons you’ve learned in making your first film and navigating the festivals?

MJS: Do your research and if you can, snag a personal contact with someone within the festival structure even before submitting to it. It will go really far once you’re ready to submit. There’s nothing wrong with having an “in.” Be personal and go the extra mile to convince the fest your film is one their festival NEEDS. Also Watch Paul Osborne’s Official Rejection, a documentary on the politics of film fests, and go ahead and buy Chris Gore’s Ultimate Film Festival Survival Guide. Both are invaluable resources to any independent filmmakers prepping to take on the fest circuit.

“Give back to your audience…because honestly, without them, your film is just that, a film…” 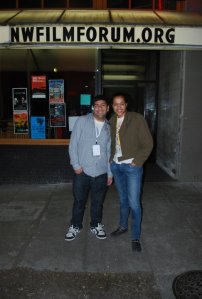 HF:  What tools or skills have you found to be the most effective for building an audience?

MJS:  First and foremost, (and it’s kinda sad how many people overlook this step), have a quality film.  Second, know your demographic, and third, be personable. People like to deal with real people; be genuine, know your stuff, and continue to build relationships with those who are in similar situations. Reach out and connect, it’s a two way street. Give back to your audience, treat them like royalty because honestly, without them, your film is just that, a film…that no one is watching. Cultivate your image both on and offline, and I can’t stress enough how important social media is. It’s one of a filmmaker’s strongest tools. It’s free but it is an investment. Your audience is waiting for you. All you have to be willing to do is put yourself out there in creative engaging ways.

HF:  What are you working on now?

I’m both co-writing and producing. It’s a truly amazing project and the group of people we’ve already assembled in development is by far the strongest, most versatile, and talented set of individuals both myself and my director, Timi Brennan, have worked with in either of our careers. We’re working very hard to push the envelope and raise the bar on what people would consider possible for an independent film shot in what would be considered a less than ideal filmmaking climate.

The story itself is about a young girl, haunted by immense psychic abilities, who becomes entangled in a bizarre underworld of machinery and magic. I can list on one hand the amount of properly made sci-fi fantasy indie films, and my sincere hope is that Fruition Hard Line will be able to join their ranks. It’s going to be a long haul but I most definitely think it would be worth you guys coming along for the ride. As we say at Magnolia Hideout Pictures, it’s all indie film world domination up in here 🙂

To connect with MJ Slide and learn more about her work, check out the following:

If you’re anything like me, sometimes you need a real kick in the ass to get going and recognize the power you hold and the talent you possess.  Today, I’m inspired.  I’ve been reading a blog lately that really lights a fire under me to get up off my keister and get sh** done!  Just Add Cape: adventures in becoming a real life superhero (see blog roll on right), a blog by L.A.-based writer-director-producer-actress Kai Soremekun, is all about finding inspiration, becoming empowered and finding your voice.  Her web series CHICK is all about that, too.  It’s definitely a package deal you get with the blog and show, a full-on brand that focuses on empowerment.  Wow, we need that! (Do we ever! I hope you’ll say.)

I love Kai’s positive take on life, fears and dreams, not only on this blog, but also in her web series (about a woman who becomes a superhero).  Just Add Cape is much more than just a support or supplement to her series, it’s an incredibly nurturing space where people are called upon to be their best selves — superheroes, in fact!  THAT, yes, that, is something the world needs more than ever.  Check out Just Add Cape, and stay tuned for the second season of CHICK…

Watch the video interview, “Feel the Fear and Do It Anyway,” with Kai Soremekun done for Her Film in 2010.

We’re kicking off a “rapid-fire” interview series this week with Stephanie Law, a young screenwriter whom I met while at the Summer Institute of Film and Television of the Canadian Screen Training Centre in Ottawa, Ontario, Canada in spring of 2009.  Sadly, SIFT/CSTC has since closed down due to major funding problems in a very tough Canadian economy.

Stephanie was taking a writing workshop while I took a producing workshop.  I think we both agree that SIFT was an amazing program that allowed us to learn so much from the working professionals in film and television who taught the workshops.  It was also a great opportunity to meet interesting people in film/TV taking the workshops alongside us!  It had a prestige all its own and many connections with, and support from, renowned filmmakers and show runners.  The late filmmaker, Anthony Minghella, in particular, was an early and active champion of SIFT and also taught on the program.

Stephanie Law was kind enough to do this interview via facebook email!

On to the interview…

BIO: Stephanie Law is a Toronto-based newbie screenwriter, ex-serial intern, eternal optimist/ cynic, and recent participant in the CFTPA’s National Mentorship Program. You can find her rants on her mini-blog ImagineStories, or even more mini rants on Twitter @sphinxmagic.

Q: What are your thoughts on the state of Canadian film and TV today?

A: Not good! The English feature film business in Canada (Quebec is a whole other ball game) is tough. The process is slow (there are no big studios, just independent producers that tap into funds, tax credits), and when you factor in all those years spent developing a film—keeping into account that it may never be made—the writer makes very little, and certainly for the majority, not enough to live on. Hence, the day job! In addition, films need a great first weekend to keep their theatrical run alive. If nobody goes to see it, it’s gone (until the DVD comes out). One of the big problems for finding an audience is publicity and marketing—big American films spend millions (sometimes even more than the production budget of the film itself)—but in Canada, we just don’t have the money.

The TV industry is complicated, and I have less experience with it. I will defer to veteran TV writer Denis McGrath’s excellent blog Deadthingsonsticks.

Another great resource for all things industry and writing-related is the amazing Ink Canada (on Facebook) [and Twitter], an online writing community led by screenwriter Karen Walton.

A: The best and worst thing of being a screenwriter is one in the same: you. You depend on you. It can be marvellous and freeing because all you need to do your craft is your brain, a piece of paper, and a pencil. Okay, screenwriting software helps. But it can also be frightening and anxiety-inducing because you have to the discipline to push yourself, to face yourself, your doubts, your fears. If you don’t write, it’s on you.

Q: If you could decide your own fate as a writer, what would your career trajectory look like?

A: Muhahaha… I would love to end up on the staff of a TV show before I hit 30. Ambitious, yeah. At the height of my career, I’d love to be co-run a series—but that necessitates finding the perfect creative partner (because it would be that much more fun). I haven’t found that person yet, but just you wait, we will rule the world! I also have a soft spot for features, but short of going to the U.S., I don’t see much of a future here for the big budget stuff I write (hey, I grew up on Disney and blockbusters).

Q: What films, TV shows, webseries inspire you (the good, bad and the ugly) and why?

A: Stories with heart inspire me. Not that I don’t love technical and plot-driven stories– but if they don’t have characters that I care about, then forget it. I end up feeling hollow even after surrounded by the latest, greatest special effects, or whatever. It’s like watching a product, or feeling the plastic around the box. Yuck. Pixar is great at transcending the blockbuster status and money-making of their animated films, because at the heart of it, they care about story and collaboration. I’d bet my money on those two things anytime.

Q: Why will you make it as a screenwriter?

A: In all honesty, you have to believe you will succeed beyond all reason and logic. Because the smart thing to do would be to get a full-time, 9 to 5 day job with benefits and job stability. But I am a stubborn person. If I set my mind to it, I won’t stop until I figure out the solution, or figure out that it’s beyond me. For instance, when I was in high school, I wasn’t the best at math, but I spent hours trying to solve sometimes just one problem (be it physics or calculus), trying to understand. Sometimes I just didn’t have the knowledge or the skills yet to solve the problem (maybe the advanced material was to be covered in the next unit), but I kept at it. And because of that, I did well. That’s the stubborn perseverance that I hope will allow me to succeed and become a professional screenwriter.

Many thanks to Stephanie for doing this interview!